The 18th Asian Games will be held in Jakarta and Palembang from 18 August to 2 September 2018. This Games attracts 45 delegations from Asia to participate across 40 sports, in which 28 sports are Olympic events. This is a historical moment for Indonesia, as Jakarta will be hosting the Asian Games for the second time after the 4th Asian Game in 1962 and it is the first ever Asian Games to be hosted by two cities.

The design concept of the Brandmark 18th Asian Games 2018 logo is inspired by the shape of Gelora Bung Karno Main Stadium, with eight paths leading to the stadium and the shining sun emblem of the Olympic Council of Asia logo in the center, which reflecting the “Energy of Asia” theme.

The design tells that the “Energy of Asia” will radiate throughout the world. The multi-colored art design symbolized of the multi-national culture and nature of Asia and Indonesia. 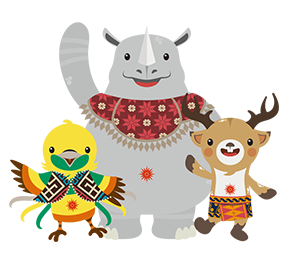 The Energy of Asia lies in the diversity of its culture, heritage, and legacy. Base on the same idea, the Founding Fathers had envisioned a strong and united nation under the Bhinneka Tunggal Ika philosophy and thus decide to propose three different animals as the official game’s mascot. The designs were selected following a competition held by Indonesia’s Creative Economy Board.

In correlation to Asian Games, each of these animals represents an aspect of the sport competition such as strategy, speed and power.